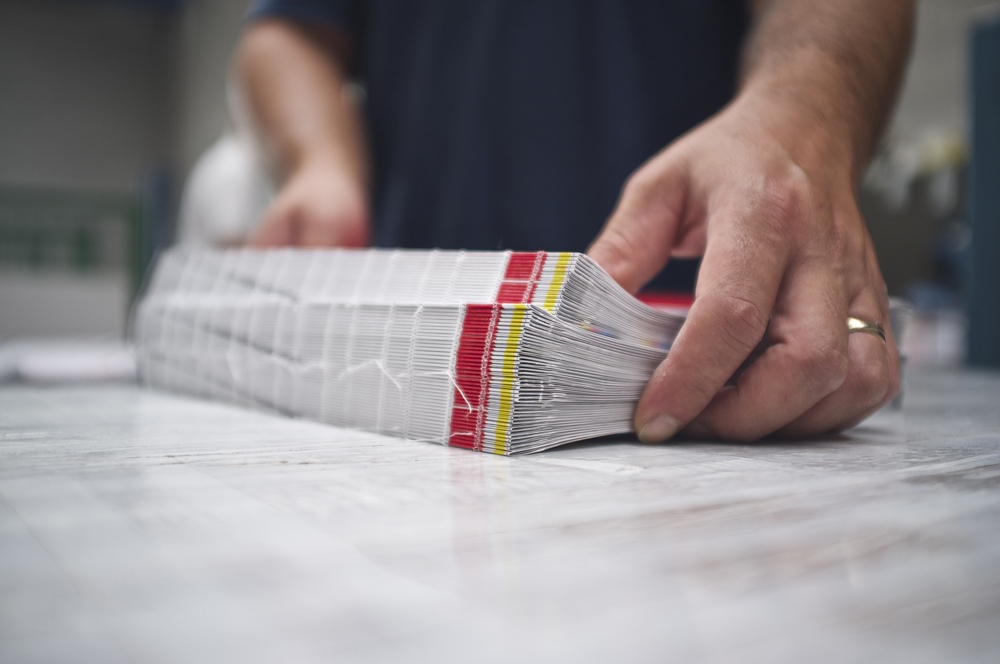 Did you know that the first magazine was created in Germany in 1663? Did you know that before Europeans used paper, the Romans wrote on wax tablets that were bound together with twine? Today, printed material is common in everyday life, and it is easy to take it for granted. However, looking into the history of print binding reveals a rich and fascinating past. At Dollco Printing in Ottowa, ON, we have been part of that legacy for over 100 years. Here are some highlights from the history of binding printed material.

What Is Print Binding?

Print binding is the process of securing pages together, usually using stitches, glue, or staples. While writing existed in ancient civilizations, notably Mesopotamia and Egypt, the physical forms of books and magazines have a much more recent history. The process of binding printed material has evolved over centuries to allow written text to be recorded, preserved, and disseminated. Major breakthroughs in the process served several needs:

1. The First Books Were Made in India.

The first objects that resemble our modern books were created in India around 100 BCE. They were made from palm leaves, onto which symbols were carved. After drying, the palm leaves were folded together and bound with twine. Interestingly, these leaves were numbered, like the pages of books and magazines today. This format was used for religious sutras, and it spread into Afghanistan and China via Buddhist monks in the 1st century BCE.

2. In the Ancient World, Scrolls Were the Best Way to Record Information.

In the ancient world, court documents, religious texts, and important records were kept on scrolls. There were two main forms of scroll. The first used a single roll. It could store a great deal of information, but had to be completely unwound as it was being read. The second form used two rolls. It allowed the reader to roll and unroll the text at the same time, providing easier access to different passages. Scrolls were used in ancient Egypt, Israel, Greece, Rome, East Asia, Central Asia, and beyond.

3. The Wax Tablet and the Codex Preceded the Modern Book.

In addition to scrolls, the Romans started using wax tablets to keep written information around 100 AD. These tablets resembled books because they had writing on flat sides that were bound together. The diptych form had only two bound tablets, while the polyptych form had several. The main problem with wax tablets was the fact that, because they were heavy and took up a lot of space, people couldn’t use them to record a lot of writing.

Relatively soon after the development of wax tablets, the Romans switched to using papyrus or vellum, which are thinner, lighter materials. This style of bound volume, called the codex, first made an appearance around 150 AD. Due to the fact that the codex could be used for more text, it had mostly replaced the wax tablet by the 4th century. The last wax tablets stopped being used in the 500s. Over the centuries, the codex underwent various changes regarding the covers, the pages, the spines, and the binding methods, eventually becoming our modern book.

4. The First European Books Were Bound With Flat Spines.

From the 5th to the 15th century, binding methods involved folding parchment pages and sewing them together with cords. They were then attached to wooden covers, which were wrapped in leather. Leather became popular because it allowed for artisanal decoration, a practice that would eventually become today’s cover art. The spines of these books were flat, which allowed them to rest evenly on a surface for reading. In the 15th century, rounded spines replaced flat ones because they proved to be more durable.

5. Paper Was Invented by the Chinese.

A rudimentary form of paper was used in China during the second century BCE. Paper became more widespread with improvements to its composition in the 1st century, AD. These improvements were initiated by Cai Lun, a eunuch of the Eastern-Han court. The use of paper spread to Arab civilizations in the 8th century during the Islamic Golden Age. Bookmaking thrived among the Arabs, notably in Marrakech, Morocco, and other major cities. European bookmakers began using paper in the late Middle Ages.

6. The Invention of the Printing Press Made Printed Material More Widespread.

In the mid-1400s, Johannes Gutenburg invented the printing press. This machine allowed for the creation of books via movable type, greatly speeding up their production. Following this invention, more and more people outside the wealthiest classes could afford printed material, and printing houses sprang up all over Europe.

In the medieval world, the process of print binding wasn’t standardized. A variety of materials and methods were used to create books in a wide range of sizes. The first written instruction on the process of print binding appears in a book about the applied arts, which dates to 1100 AD. The first comprehensive manual on binding printed text is a series of four volumes that were published between 1741 and 1753 by Christoph Ernst Prediger. They described several methods, the materials needed, and the time it would take to complete the process.

8. Magazines Date Back to the 17th Century.

In 1663, the German Johann Rist published the first periodical, called, “Edifying Monthly Discussions.” It circulated for five years amongst the educated elite and inspired similar formats in Italy, France, and England. During the 1700s, periodicals became more popular in Europe as interest in literacy rose, especially among women. In 1842, the Englishman Herbert Ingram saw the commercial potential of using images as well as text. He created the first illustrated magazine.

9. In the 19th Century, Printed Material Became Cheaper and Accessible to More People.

During the 19th century, there were significant changes to the form of printed material and the process of creating it. Cloth binding replaced twine, making books more durable and more aesthetically pleasing. The first dust jackets were invented in 1819, allowing less wealthy people to protect their books. In 1827 the rolling press allowed pages to be flattened efficiently for binding. It replaced the practice of hammering the pages manually. These changes made books affordable for more people.

10. Today, There Are Four Main Methods of Print Binding.

Hardcover binding is the most durable method. Pages are grouped and sewn together in signatures and bound with textblock.

This method involves punching holes in the pages and connecting them with wire or plastic. It is usually used for office supplies and notebooks.

Thermally activated binding is the process by which the pages of a paperback are glued together.

This last method connects pages with staples that are inserted through the centerfold. It is a popular method for securing magazines.

Throughout history, people from around the world have contributed to the history of print binding. From the invention of the scroll to the rolling press, the developments in the process of printing have made information increasingly accessible, forever changing the way ideas move around the planet.

Contact Dollco Printing in Ottawa, ON for the highest quality printing services. We are proud to be part of the rich history of the printed word, and our methods utilize the most advanced and affordable processes available.